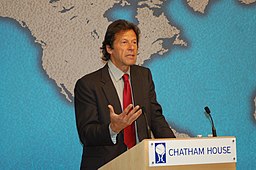 Biography of Imran khan. He is the current Prime Minister of Pakistan. 22nd PM and former captain of Pakistan cricket team. The very qualified politician in Pakistan ever.

He was born in Lahore on 5 Oct 1952. Although, it was written wrong by the Pakistan cricket board but later on it was claimed that the exact date is 5 Oct 1952. He is the only son of Ikramullah Khan Niazi, a civil engineer, his mother name is Shaukat Khanum and has 4 sisters.

Imran Khan was quiet and shy boy in his youth. He started to communicate with people with the passage of time and started public speeches to bring changes in Pakistan after Pervez Musharraf gone in 2010.

He was very innocent even people started call him ‘playboy’ due to his love affairs at that stage of his childhood. As he belongs to very rich family that’s why he pursued his privilege degree. Aitchison College and Cathedral School Lahore after that the Royal Grammar School Worcester in England. He has studied Politics, Economics and Philosophy in Keble College, Oxford and graduated in 1975.

Imran Khan made a nation wide funding appeal for the collection of Shaukat Khanum Cancer Hospital and Research Center in November 10, 1989 that raised up Rs. 2,902,600. Nevertheless, the inspiration to build a cancer hospital came after his mother Mrs. Shaukar Khanum who succumbed to cancer in 1985.

After announcement, Imran Khan received so many requests from different political parties to join them but he declined all of them and started his own party Tehreek-e-Insaaf (PTI) in 1996. He strove compete his first general election in 1997 in which didn’t get success and lost it very badly. He was very determined continuously worked hard. But, unfortunately did not get his goal for a long time and has been unsuccessful. Then 23rd of march 2013, Khan introduced NAYA PAKISTAN RESOLUTION (new Pakistan) at the start of his election campaign. However, khan didn’t give up and moved towards his goal and participated again in 11 May 2013 elections. Unfortunately, he didn’t get a success over PLMN. Although, there have been acrimonious War Of Words between PLMN and PTI.

2 thoughts on “BIOGRAPHY OF IMRAN KHAN”