The Endocrine Organ System performs chemical coordination within the body. However, the word endocrine derives from the Greek term. The “endo” means within, while “krine” means to release or secrete. There are many glands inside the body and each gland releases a variety of hormones. Hormones are chemicals that coordinate different functions in your body by carrying messages to your organs, muscles, skin, and tissues through your blood.

The release of hormones from the glands maintains the body’s functions. Unlike Exocrine Glands, these are ductless which means their secretions are released directly into the blood, not to any tubes or ducts. Therefore, these are also known as ductless glands. 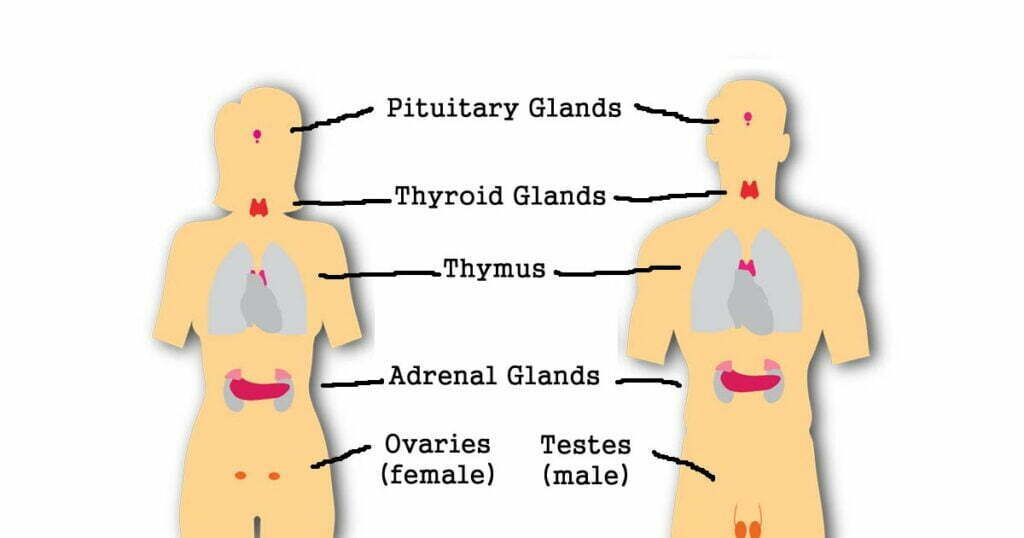 These glands help promote growth, reproduction, glucose levels, sleep, etc. The system uses some chemicals (hormones) to control all these factors. It releases hormones into the blood that carries them to the organs, tissues, etc.

Different types of vital glands play an important role in controlling the body’s functions. However, some of them are as follows.

It is a small, oval-shaped located at the base of the brain and attached to the hypothalamus. There are two main types, an anterior lobe, and a posterior lobe. However, their hormonal functions are different.

These hormones control body growth. Therefore, it is usually called growth hormones. It has a vital role in the Endocrine Organ System. There are three main conditions under which it operates that include dwarfism, gigantism, and acromegaly.

Somatotropin hormones do not grow well in this condition. Therefore, it prevents the increase in height which keeps the body short.

In this condition, somatotropic hormones exceed. Then, the growth of the body directly increases more than expected.

In this condition, some parts of the body are more likely to become enlarged such as fingers, hands, feet, neck, etc.

Endocrine Organ System: The posterior lab also plays an important role in the system. It releases two main hormones such as vasopressin which is also known as ADH (Antidiuretic Hormone) and Oxytocin.

Vasopressin works as reabsorb water within the body. These hormones turn on and reabsorb water if the body is dehydrated. On the other hand, if the amount of water within the body is high, then the level of these hormones is decreased so that water is released. Furthermore, a condition called diabetes insipidus in which the excess amount of water is excreted into the urine.

This hormone works mainly in females. It acts as a neurotransmitter and also plays a vital role in reproduction. Oxytocin works in the contraction of the female’s uterus walls and releases breast milk. In males, it helps in moving sperms.

As the name indicates, thyroxine hormones get increased, which means that the thyroid gland produces extra heat (energy). In this case, the heart beats faster than usual. In addition, some of the functions may alter.

Endocrine Organ System: In this situation, the amount of energy within the body decreases. Therefore, there are chances that the heartbeat may be affected.

Calcitonin hormone decreases the number of calcium ions in the blood and deposits them into the bones to strengthen them.

The adrenal cortex has a group of hormones called corticosteroids.

The adrenal medulla has certain hormones called epinephrine or adrenaline.

The pancreas is the most important gland of the Endocrine Organ System. It was discovered by a scientist named Langerhans. Therefore, it is also known as Islets of Langerhans. He discovered some tiny cells called glucagon and insulin. The pancreas has two main parts Exocrine and Endocrine. Exocrine are duct-based secretes certain types of enzymes in the small intestine. The endocrine is ductless that secretes hormones. In addition, the Endocrine secretes two types of hormones called glucagon and insulin.

How does the sugar increase? Although, it increases due to the excess amount of sugar consumption. But, people enjoy soft drinks a lot.

Note, One glass contains as much sugar as we need throughout the day. When a person starts soft drinks regularly along with other normal food. As a result, there is a risk of developing diabetes mellitus. Remember, 80-120 mg / 100 ml sugar is normal.

It is also one of the important glands. Mainly works as sexual glands. Nevertheless, it consists of two glands called the Testes and Ovaries. The testicles are found in males and the ovaries in females. However, the testes secrete testosterone hormones. It increases the secondary characteristics of males such as facial hair, body growth, the production of RBC (red blood cells), sperms, etc.

On the other hand, the ovaries secrete estrogen/progesterone hormones in the females. It increases the secondary characteristics of females such as abnormal menstrual period and menopausal symptoms. Also, it becomes active during pregnancy.

Nonetheless, if you have any questions then simply ask us. We will be more than happy to help you. You can also click on the link below to download the Pdf file.