Khabib Nurmagomedov Complete Biography, His family, Net worth, and a lot more. Recently people are really in touch to know much about UFC. Khabib fighting with Conor McGregor made it even more interested to get in touch with the latest updates. We covered each and everything related to khabib and his UFC career. 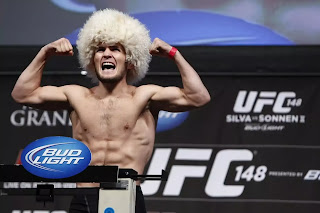 His full name is KHABIB ABDULMANAPOVICH NERMAGOMEDOV ‘The Eagle’. He was born on 20th September 1988 in the village of Sidi, Tsumadinsky, District in Dagestan which is in the Russian federation. He is an Avar and a Sunni Muslim. Lives in Makhachkala Dagestan. Very well known for the tremendous fighting that he has learned from his father. His father made him practice fighting when he was just ten years old by making him fight with a bear. Dagestan is a mountainous area that is known for its history of warriors and khabib also considers those warriors his ancestors.

His father has been in the Russian army. He has been very punctual in means to discipline. Furthermore, he has been a national champion in free-style wrestling like Judo Combat and Sambo. His father taught him the discipline of the army and fighting like a soldier. His father made a gym for him in his double-story house on the ground floor where he used to train not only khabib but other kids too.

Khabib Nurmagomedov and His Success

When khabib was seventeen years old he got a black belt in judo and karate. He also won the title of sambo combat champion twice. Before becoming a UFC fighter, he also used to compete in street fighting and made his opponent lick the dust in street fights. He had his debut in MMA in 2008 when he was just 20 years old and within a month he won all four fights. He became the champion in the Moscow event, the inaugural anthem cup.

Looking at his record of 16.0 in the Russian region he was allowed to join UFC. 2011 khabib signed a contract for six fights in the lightweight division and he won all the fights. In his fight with Abel Trujillo, he made a world record of 21 takedowns in just 27 attempts. He challenged the previous champions of UFC but they refused to fight against khabib because they were afraid of him.

From 2014 – to 2015, khabib had to stay away from the ring due to his injuries. In September 2016, he signed a contract for a lightweight championship but again the opponent refused to fight against khabib. His wait ended in April 2018 when he fought against a fighter in the lightweight championship. After winning this fight, khabib became the first Muslim UFC champion. He is also the president of eagle MMA fighting where other Russians are being trained by him for fighting. Khabib trains himself twice a day and his father is his real trainer. He is a huge fan of Cristiano Ronaldo.

UFC means ultimate fighting championship where one can only survive through his cleverness, activeness, and power. If a person wins this title, he considers himself the most powerful person in the world but this time the history of UFC has been changed by a Russian Muslim mixed martial arts fighter KHABIB ABDULMANAPOVICH NERMAGOMEDOV who was fighting against a fighter from Ireland Conor McGregor.

The UFC experts say that this kind of fight has never been seen in the entire history of UFC nor do even we can hope for this kind of fight. Khabib has won 29 matches of UFC’s‘ ultimate fighting championship’ by being the longest undefeated fighter and making a world record. Where Conor McGregor, the two times champion of UFC was unremarkably defeated.
If you don’t know about UFC then let me tell you that it is a free martial arts fight. There have been many fights in which even the life of the fighter was in danger and some of them lost the battle by losing their lives.

Khabib vs Mcgregor fight has been very fascinating. In a press conference before starting the match, Conor McGregor once bad-mouthed khabib and his family. Khabib kept his cool and didn’t react to it. It is famous that he usually does this to haunt his opponent and cross his line. He offered alcohol to khabib but he refused to take it and replied that he does not drink McGregor kept offering him alcohol and tried to give him the glass but khabib denied having it. Khabib said that he is here to defeat him this made Conor McGregor angry but it didn’t affect khabib rather he was smiling. McGregor thought that he could terrify khabib and take advantage of it in the ring but he didn’t know that he is not afraid of him.

After winning the battle against McGregor, khabib became the first Muslim UFC fighter champion. When Conor lost the fight, his fans lost their minds and abused khabib and bad-mouthed Islam. This made khabib super angry and lost his calm and jumped out of the ring and attacked them in the crowd. After that, he apologized for his action and said that he didn’t want to do that but if someone says anything bad about my religion, I cannot tolerate it. After seeing the whole scene, the athletic commission decided to freeze the winning prize of two million dollars to Khabib and give three million dollars to Conor McGregor.

Khabib Nurmagomedov is one of the top UFC fighters who is undefeated in his entire career. He proclaimed retirement after playing 29 matches of his career in which he won all the 29 with zero losses. His Net Worth is approx round about 40$ million. Which is a huge amount for any UFC fighter. He became popular for his undefeated rank and because of his aggressive skills. Fighting against Mcgregor made him even more popular for the dramatic scenes that happened before and after the match.

Khabib didn’t get defeated in his entire career. This is very interesting and made him a more famous personality. The reason of never been defeated is because of his dedication and determination toward his career and profession. His father guided him very well and made him a good fighter. When he was a child, he has been practicing with a bear which gave him positive achievements.

Khabib proclaimed to declare his career after winning the battle against Justin Gaethje. He had tears in his eyes after a beautiful victory. It was a very enjoyable moment where he proved to be the top UFC fighter who has not been defeated in his entire career. After done with the 29-0, he announced his retirement.